Bangalore. Corona bomb exploded in an international school in Karnataka. 33 students and 1 staff member have been found infected with coronavirus in this school

The District Health Officer of Bangalore Urban said that all are asymptomatic and have been isolated. Of these, 2 were taken by their parents to Nagpur and Hyderabad. These states have been informed. The staff member who has been found corona infected had received both doses of the vaccine. 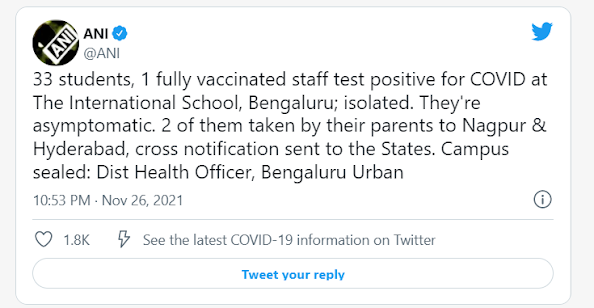 According to reports, in the last 30 days, 2,400 students have become corona positive in 10 big states . Most of them are above 18 years of age and had taken both doses of the vaccine. Maharashtra has the highest number of 1,700 students among the infected students. Recently, 182 medical students have been infected with a corona in Karnataka, whereas in November itself, 75 cases have been reported in Odisha, 20 in Rajasthan.

Similarly, cases of infection among students have also been reported in other states. Parents of infected students have started demanding the closure of educational institutions again.