What will happen if all the glaciers in the Himalayas melt?

What will happen if all the glaciers in the Himalayas melt? 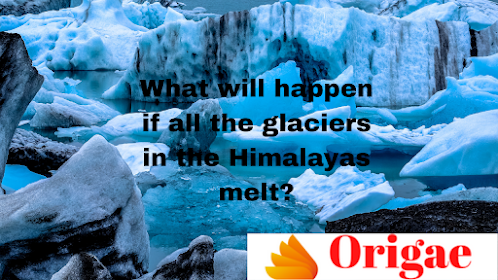 Global greenhouse gas emissions and carbon dioxide emissions are causing the temperature to rise. Sea, forests, and glaciers, three together prevent 90 percent of the earth's heat, but also play an important role in keeping the earth's 'weather' and 'climate' fit for life.

In the last few years, due to markets, imperialism, and population explosion, all three have suffered rapidly, due to which global warming has started but it is not visible to anyone.

Once again the attention of the world has been drawn to the climate change caused by global warming and the rapid melting of glaciers. A study was conducted by the United Nations Environment Program on Himalayan glaciers.

If the Himalayas and other glaciers of the earth keep melting due to temperature, then our earth will get absorbed in the sea. The climate of the earth is changing due to global warming. All this is happening due to pollution (greenhouse gases).

There are many types of pollution. Due to the smoke from our vehicles, smoke from coal plants, smoke from factories, and many other reasons, the amount of carbon dioxide in the earth's atmosphere is increasing, due to which the temperature of the earth increases by more than one degree. and the amount of oxygen is decreasing.

In the first 100 or 200 years, if there was an increase in temperature by one Celsius, then it was classified as global warming. But in the last 100 years, there has been an increase of 0.4 Celsius so far, which is very dangerous. Although global warming is a broad topic, it is understood only by understanding here that what is the main reason.

Naturally, it can take thousands of years for the Earth's climate to become one degree colder or warmer. The changes in the Earth's climate during the ice age cycle are due to volcanic activity, such as changes in forest life, changes in the radiation of the sun, and other natural changes, all these are the climatic cycles of nature, but in the last years human. Due to the increase in activities, this change has been seen which is dangerous for human existence.

Due to this global warming, while the crisis of drinking water will deepen, there will be a rapid change in the weather and due to the temperature rise, it will take the heat even on the cold days. So one can imagine how dangerous it would be.

The population of the earth has crossed about 7 billion. In such a situation, exploitation of natural resources is destroying the earth. A few years ago, GEO-4 had warned that if natural resources continue to be exploited in the name of economic development, then in the coming 150 years, due to climate change, the environment of the earth will not be suitable for any living being and human.

Coal and diamonds are extracted from the mine thousands of feet below. Due to the practice of boring, holes have been made in the earth from place to place. Forests and mountains are being cut fast. Fields are being turned into blacks. Rivers have been polluted and excavation work is going on under the sea as well. Garbage has also been spread in space.

Possibility of Life On Mars

There is already a crisis on the ozone layer, due to gas emissions and carbon dioxide, the temperature of the earth is increasing. Due to all the above reasons, the number of storms and earthquakes has increased. The weather has completely changed, there is more rain and there is a drought somewhere. Nature is repeatedly warning humans by showing its wrathful form, but humans have continued all kinds of atrocities on the earth.

When scientists collected the past and present data and entered it into the computer, when they wanted to know the condition of the earth after thirty years, they came to know that the temperature of the earth has increased by a whole degree. The rate of melting of Himalayan glaciers is increasing, the sea level is rising by 1.5 mm per year and the Amazon rain forest is set to end rapidly.