The coal shortage/crisis In India is equal to Electric CutHello, friends.

Throughout the country, the news of a coal shortage is coming in.

Because of the coal shortage, we may have to face an electricity crisis

in order to conserve electricity.

scheduled power cuts are being planned,

as per news reports.

And in some areas of Bihar and Jharkhand, there are already power cuts of 5-6 hours.

What is the exact reason behind this coal shortage?

And what can be the solutions?

that if there is no coal supply,

then Delhi will have a blackout after 2 days."

that have raised concerns over the long power cuts,

due to the shortage of coal."

"The European countries are certainly not alone

in their struggles with energy supply.

India is facing a crunch in coal."

Interestingly, friends, this isn't happening only in India.

We are getting similar news from all over the world.

A few days ago, in Lebanon, there was a total blackout

due to a coal shortage. 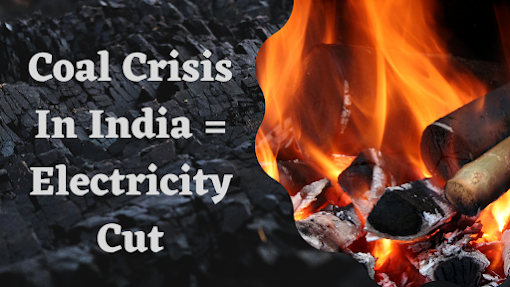 about 1 month ago, Europe was also going through an energy crisis.

This summer was quite cold for many European countries.

The weather conditions were unseasonably cold in Europe,

because of this, the demand for gas increased

and the price for natural gas also increased due to it.

to switch on their old coal power plants

because they weren't able to meet the energy demand in their country.

So the demand for coal increased too.

And so did coal's price.

In fact, a 13-year record high price of coal was achieved.

On the other side of the Earth,

over Chinese social media, a piece of news was circulating about 15 days ago.

About how some people were stuck in a lift because of a power cut.

Some people weren't getting a proper water supply.

In many schools and homes, people had to face power cuts.

And many factories had to shut down.

Why was there a power shortage in China?

There are 2 main reasons for it.

Because Australia had demanded an investigation into China

about how the novel coronavirus came from their country.

they said that they would stop this deal with Australia

and they wouldn't buy coal from Australia anymore.

And thus there was a coal shortage in China.

The second reason is that, the Chinese Government,

is aggressively pushing for climate reforms.

The Chinese government is trying to reduce its dependence on coal

and a switch to renewable energy as soon as possible.

That's why the factories were pressured

to meet their climate goals.

But the coal shortage was so severe that the government

was forced to increase production in the coal mines 3-4 days ago.

if the supply of a product is low and its demand high,

its price would go up.

it is important to mention here that

China and India are the largest and second-largest producers of coal.

But at the same time,

they are also the largest and second-largest consumers.

they are the largest and second-largest importers of coal as well.

Because their coal production isn't sufficient to meet their needs.

Their consumption is so high that despite being the largest producers,

they need to import coal.

And they're the largest importer at that.

was from India, Indian coal.

And less than 28% of coal was imported.

What are the reasons for the coal shortage in India?

First, because of last year's lockdown, the Indian economy was at a standstill.

And the power demand was reduced due to it.

In 2021, the lockdown was withdrawn, and the economy is reviving again

and the power demand has increased again.

The demand for electricity has increased in 2021.

the power demand had increased by 13.2%.

In our country, even today, about 70% of the electricity is generated by coal.

With an increase in demand for electricity,

the demand for coal would also rise

The second reason, parallel to the increase in demand,

the supply has decreased.

The international prices of coal are increasing,

as I told you, because of what's happening in Europe and China.

And because the international prices of coal are increasing,

India has reduced its imports.

the imports of India were 30% lower

than the average of the preceding 7 months.

then India has imported 42% lesser coal.

The third reason, since the imports of the country, was falling,

the production in the country

should have been increased to compensate for it.

But it wasn't so.

Instead, its reverse happened.

The coal being produced within the country,

its production had also decreased,

Because the monsoon season was particularly bad this year.

And because of it, flooding and waterlogging were seen in many coal mines.

but the transportation of the coal suffered as well.

The Ministry of Power had issued a statement

that some states didn't have sufficient coal stocks with them

before the onset of the monsoon.

There were some issues in some states because of the dues to the coal companies.

In every coal-powered power plant, friends,

some coal is left as stock.

The amount of stock depends on

how far the power plant is from a coal mine.

If the power plant is quite far from the coal mine,

then it will take longer for transportation

so a larger stock should be maintained.

If the coal mine is nearby,

then there is no need to maintain large stock.

But the CEA data has revealed

that as of 4th October,

on 4th October, of the 135 coal-powered power plants

in 108 of those power plants, the coal stock was critical or super-critical.

Critical means that the stock would last 7 days or less

and super-critical means that the stock would last only 4 days.

Because of this, many power plants across the country

are operating at their 50% capacity.

What are the consequences of it?

There is a rising concern of a total blackout in several states.

The electricity may be completely cut off.

because of the coal shortage.

And advised the consumers to use electricity sparingly.

To think before they use.

Punjab and Rajasthan have officially announced that

every day, there would be a power cut for some hours.

as compared to letting people use electricity as they please now

and later when there'd be a power cut, no one would know how long it might last.

In Punjab, 5 thermal units had to be shut down across 3 power plants.

In Kerala, 4 power plants have shut down.

And perhaps the situation is worst in Bihar and Jharkhand.

that his state is going through a power crisis.

In the next few days, you may get power cuts in Delhi, Gujarat, Haryana, and Uttar Pradesh too.

Even after all of this, our central government says,

that an unnecessary panic is being created for the coal shortage.

And he says that it is a miscommunication between two companies.

Between GAIL and Tata.

And that we have sufficient power available.

But at least the Union Coal Minister, Pralhad Joshi

is thankfully not in denial.

He acknowledged that the country is facing a coal shortage

and he claims that this situation would improve in the upcoming 3-4 days.

On 11th October, Home Minister Amit Shah had a meeting with

Talking about immediate solutions to this problem,

RK Singh has said that bidding is underway

for mine developer and operator.

Wherever there is land available with clearance,

the coal production can be increased there.

If we talk about the existing coal sources in India,

is actually from Coal India Limited.

It has 345 mines in operation.

Most of the coal being produced

is for the power sector to produce electricity.

An immediate solution is said to be

the ratio of the power sector should be increased

And the coal used by the industries

should be reduced for now

and be diverted for electricity generation

so that the people do not have to face power cuts.

In addition to increasing domestic production, if the coal imports are increased,

then it may mean that the companies importing coal

would do so at a higher price

because of the increase in international coal prices.

So for a common man, it would mean

the cost of electricity may also increase

along with a boost in the electricity bill.

But obviously, these are immediate solutions.

But if we talk about long-term, sure shot solutions for similar situations,

to deal with such problems,

would be to reduce our dependence on coal.

And switch to renewable energy.

The good news is that for some years now

the Union Ministry of Renewable Energy had announced

that the country had crossed a new milestone

Meaning that this capacity of renewable energy has already been installed in the country.

This was the target for 2022, that India had achieved in advance.

This is good news.

Apart from it, another solution is said to be the government's increased focus on MSMEs.

As compared to large million-dollar companies.

Because MSMEs are more energy-saving.

What is your opinion here?

Tell me in the comments below.

Thank you very much!