NASA's Juno released a picture of Jupiter's largest moon, know how many moons there are 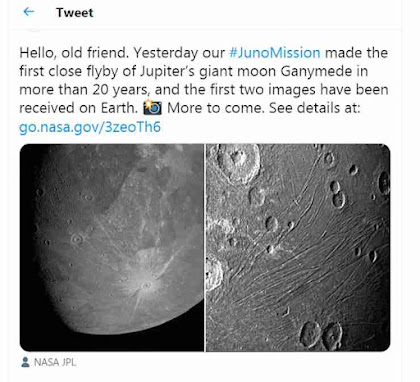 The Juno spacecraft of the US space agency NASA has released the picture of the largest moon of Jupiter (Jupiter). It is being told that it is the largest moon in our solar system. Its name is Ganymede. The first two photos of NASA's Juno on June 7, 2021, were obtained from a flyby of Jupiter's giant moon Ganymede.

know how many moons there are?

1. The diameter of Ganymede is said to be 5,268 km, which is 8% larger than the planet Mercury. Its mass is also the largest of all the moons in the solar system and is 2.2 times that of Earth's moon.

2. NASA's Juno spacecraft visited Ganymede, the largest moon in the Solar System, swirling at a distance of about 1,000 km from the surface.

3. After two decades, that is, after almost 21 years, the Juno spacecraft has sent high-resolution pictures of the Moon to Earth.

4. The images that have emerged focus on several surface features, including images of craters and tectonics.

6. NASA said that the spacecraft has managed to cover almost the entire part of the Moon surrounded by water.

7. NASA scientists will now work to make a color photo of the Moon, which is bigger than the planet Mercury. Taking the photos, Juno's Principal Investigator Scott Bolton said that this is the closest any spacecraft to this giant moon in a generation.

8. According to Greek mythology, the Juno spacecraft, named after Jupiter's wife and goddess Juno, was launched by NASA in 2011, after which it reached the planet, Jupiter, in 2016. Since coming into orbit around Jupiter, the spacecraft has been trying to understand the origin and evolution of the planet through its dense cloud cover.

9. Jupiter planet or say Jupiter planet is the fifth largest planet in our solar system. In the solar system, the number of Jupiter comes after the size of the Sun. The diameter of this planet, located far away from the Earth, is about 1.5 lakh kilometers and its distance from the Sun is considered to be about 778000000 kilometers.

It is 13 km. It makes one revolution around the Sun in 11 years at the speed of one second per second. It rotates on its axis in only 10 hours. About 1300 earth can be placed on it. Just as the Sun rises and sets, Jupiter rises again after 30 days whenever it sets.

After rising, it walks straight on its path for 128 days. After being on the right path, that is, it continues to revolve again for 128 days and after that, it sets again. The force of gravity is 318 times greater than that of Earth.

10. Our earth has only one moon but Jupiter has about 79 moons. The new moons that have been detected orbiting the planet Jupiter are relatively small in size. Jupiter, the fifth planet in the solar system, also has many giant moons.

Among them, Ganymede, Ganymede, or Ganymede is the largest in the whole universe. Recently, American researchers have identified 12 moons, out of which the details of 10 have been given to NASA. Of Jupiter's 79 moons, 26 are yet to be named. Of these, 9 moons are among the 10 recently discovered moons.